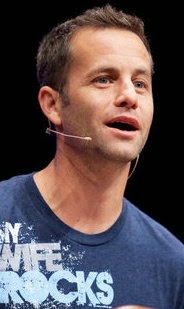 The Daily Beast points out that early this month Kirk Cameron refused to condemn same-sex marriage in an interview with an Alabama newspaper.

Kirk Cameron, the teenage heartthrob turned Christian Right entrepreneur, the man who once called homosexuality “detrimental and ultimately destructive to so many of the foundations of civilization,” has recently changed his tune. He said in an interview earlier this month that Christians should look within, rather than blaming others for the “decay” in traditional values. “I think the greatest threat to marriage is not other people’s definition of marriage,” Cameron said in a telephone interview with the Alabama-based website AL.com. “The church isn’t taking God’s definition of marriage seriously. It’s not other people sabotaging marriage that’s the problem.” Tellingly, Cameron, who has previously taken an explicit position against same-sex marriage, declined to do so in the May 2 interview. Rather, he placed the blame for society’s ills on Christians themselves. “When people get too focused on redefining marriage, you’re distracted from the bigger problem—fornicators and adulterers… If the people sitting in the pews are fornicators and adulterers, the church will destroy marriages much more quickly than those outside the church. When God’s people mock marriage, God doesn’t take that lightly.”