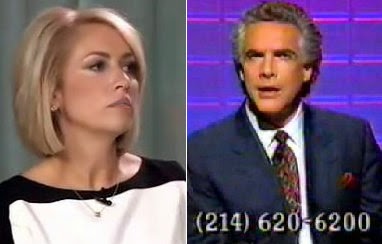 It appears that anti-gay Dallas television host Amy Kushnir, who is so terribly outraged by Michael Sam’s kiss, is the daughter of legendarily disgraced scamvangelist Rev. Robert Tilton, whose multi-million dollar grifting empire first crumbled in the early 90s following an exposé by ABC News. Christian Nightmares points us to this 2011 post on the televangelists watchdog blog Snake Oil, which refers to Kushnir as “Amy Tilton Kushnir.”

None of available bios on Kushnir list the names of her parents so I did a little digging.

Rev. Robert Tilton’s first wife, to whom he was married during the ABC-spawned scandal, is named Martha and goes by the unusually spelled nickname Marte. Two weeks ago Kushnir posted a Facebook photo of her mother’s birthday party and in the comments a friend of Kushnir’s writes, “Happy birthday, Marte!”

Robert Tilton’s mother, Margaret Ruth Tilton, died in 2006 and her obituary lists the scamvangelist and his current third wife among her survivors. Also listed is an Amy Tilton Kushnir and her husband Bill. The husband of the television host Amy Kushnir is indeed named Bill and his Facebook profile lists that he attended Oral Roberts University.

Fourteen years ago Charisma Magazine interviewed Marte Tilton and noted that she had four children with Robert Tilton, including a daughter named Amy, then aged 30. According to the Explore Talent site, Dallas television host Amy Kushnir is 44 today. In a 2001 interview with the Dallas Morning News, Marte asked that paper not say where her children live, adding that they have “suffered a lot because of their last name.” Marte and Rev. Tilton divorced in 1993, when the television host Amy Kushnir would have been 23.

That’s an awful lot of possible coincidences, but if I’ve connected the dots properly, it’s certainly understandable that Amy Kushnir wouldn’t want the world to know about her infamous father. But it’s rather illuminating if she indeed grew up in lavish mansions that were paid for by the then-estimated $80M conned annually out of old ladies by Rev. Robert Tilton, who is still in the scamvangelism game and was raking in $24M a year as recently as a few years ago.

VIDEO: I won’t go into all the ways that Rev. Robert Tilton scammed his followers, there’s plenty about that on his Wikipedia page. Let’s just close this post with one of the dozens of truly infantile and utterly hilarious YouTube clips that mock him. Maybe an Amy Kushnir remix is called for.