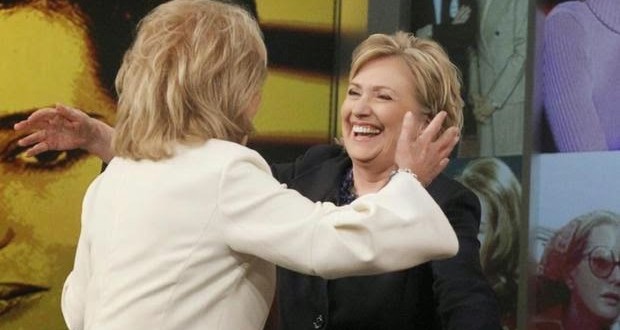 Hillary Clinton, who has been on a whirlwind schedule since stepping down as Secretary of State, surprised Barbara Walters on the final day of her 50 year career today and gave her advice – take a vacation. “You’re in no position to tell me!” Walters laughed. Clinton, who showed up on Walters’ last day on The View, said she really has been relaxing and so should Walters. “Take some time. You have a wealth of friends who adore you. Spend some time with them, take a real vacation,” Clinton said. “I go out with my dogs, my husband and I take long walks, just let down and enjoy. Clinton added: “For like a week at least.” Walters couldn’t let the possible 2016 presidential candidate go without talking trying to get a scoop, telling Clinton: “The question I really want to as you is if you are going to run.” “Well I am running. Around the park,” Clinton said to laughs.