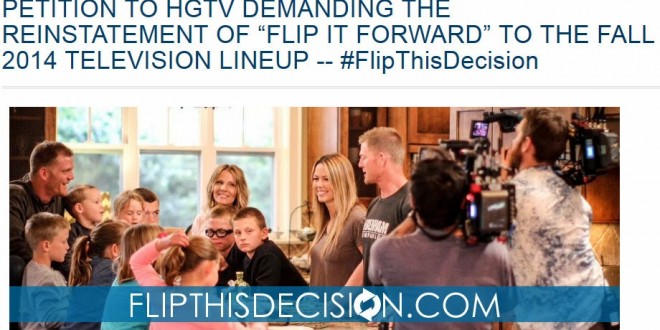 Haters Have The HGTV Sadz

The anti-gay Christian group Faith Driven Consumer has launched a petition campaign which demands that HGTV reinstate the reality show that was to have been hosted by anti-gay activists David and Jason Benham. HGTV canceled the show yesterday after Right Wing Watch exposed the Benhams’ history of advocating against LGBT civil rights. Via press release:

Following the sudden cancellation of the upcoming HGTV series “Flip It Forward” simply because the stars of the show, brothers David and Jason Benham, hold a biblical worldview on the issues of life and marriage, Faith Driven Consumer is announcing a brand new grassroots campaign called #FlipThisDecision to return the show to the network’s fall lineup.

“David and Jason Benham are well-qualified to star on an HGTV show, they are well-respected members of their community, and the network has invested time and treasure in developing ‘Flip It Forward’. Now, this project has come to a screeching halt simply because the Benham brothers hold a biblical view of life and marriage. This is pure intolerance, discrimination, and bullying toward those who hold to widely held and legitimate views. HGTV’s rash actions hold no place in America’s rainbow of diversity. Whether people agree or disagree with the Beham’s faith-driven perspective is beside the point; the Benhams have a right to have those views and to be treated equally with those who hold to other viewpoints. This is the very definition of tolerance,” said Chris Stone, Founder of Faith Driven Consumer and Certified Brand Strategist.

“Through its actions, HGTV is in conflict with its own stated core values of integrity and diversity, which emphasize ‘having a strong moral compass which points to character, honesty, ethical practice and accountability’ and hold that all are included in the ‘broad canvas of interests, backgrounds, lifestyles and ethnicities.’ This is the height of hypocrisy.

Faith Driven Consumer is endorsed by the American Family Association and Focus On The Family.

RELATED:  In December 2013 Faith Driven Consumer launched a petition campaign to reinstate Phil Robertson to Duck Dynasty. That campaign garnered over 250K signatures. Also that month Faith Driven Consumer launched a campaign which called on Christians to boycott retailers that have pro-LGBT policies. Their list of stores to be boycotted was culled from the HRC’s Corporate Equality Index. Among the companies which scored the lowest on their list: Macy’s, Home Depot, Gap, Apple, Barnes & Noble, Abercrombie & Fitch, Amazon, and Levi’s. Two months ago the group launched a boycott of  the movie Noah for its non-Biblical message.

Previous Seinfeld Book Prompts $1M Defamation Suit About Insulting Gay People
Next TRAILER: Dawn Of The Planet Of The Apes