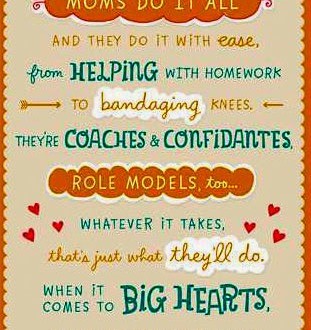 “Moms are second to none,” one card reads. On the inside, it says, “How does anyone ever get by with just one?” Hallmark Cards Inc. spokeswoman Kristi Ernsting said the company is offering two cards with same-sex sentiments this year: “One card ‘for two moms’ and one card ‘for my partner.’” They follow Hallmark’s new same-sex Valentine’s Day cards introduced this year, which Ernsting said “were well received.” Industry trade group the Greeting Card Association said same-sex Mother’s Day cards are a sign of the times. “With last year’s Supreme Court ruling bolstering gay marriage, more companies are offering same-sex wedding cards, and we’re likely to see an increase in same-sex cards for Mother’s Day and Father’s Day going forward,” director of communications Kathy Krassner said.

You-know-who is going to be furious. This year marks the 100th anniversary of Mother’s Day.

RELATED: Hallmark got flack last year for selling a holiday ornament which read “Don we now our FUN apparel.” They later issued an apology.