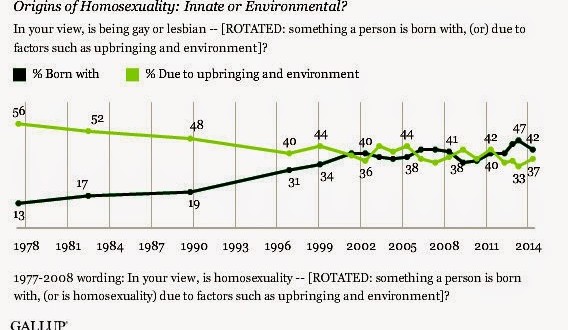 In a year when the movement for same-sex marriages continues to make strides across the U.S., Americans remain divided on how people come to be gay or lesbian. More than a third of Americans (37%) believe people become gay as a result of factors such as their upbringing and environment, while 42% say people are born gay. This latter belief is down slightly from 2013, when nearly half (47%) believed people were gay at birth. When Gallup first asked about the origins of same-sex orientation in 1977, over half of Americans (56%) attributed it to an individual’s upbringing and environment, while 13% believed it to be something a gay person is born with. This gap in opinions narrowed over the time, and by 2001, Americans were more likely to believe in homosexuality as occurring at birth (40%) for the first time, though only by one percentage point. Since then, Americans have been roughly equally divided over this question, although with some year-to-year fluctuations in the precise percentages.