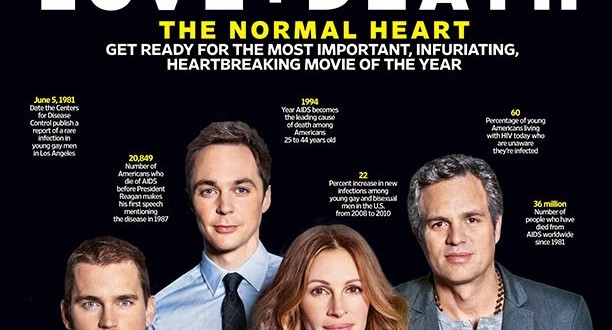 Entertainment Weekly on the decades-long journey from stage to screen for The Normal Heart:

Despite involvement from names like Barbra Streisand, who owned the rights for 10 years, The Normal Heart appeared to be destined for only theater until Glee co-creator Ryan Murphy acquired the rights in 2009 with his own money. “I really believed in it,” explains Murphy, who first read the play in college and directed the film version. “Larry set a very high price. I gulped and said, ‘Okay,’ and bought it. I think he wanted to see, ‘Is this kid serious?’ And I was.” Kramer, who’s HIV-positive and currently recovering from unrelated medical complications, was unable to speak to EW but emailed that Heart made it to the screen “because of Ryan Murphy caring passionately about getting it made, abetted by [exec producer] Dante Di Loreto.” Murphy and Kramer’s passion project will finally reach a mass audience when Heart makes its debut May 25 on HBO.

Previous The Gay Classification Kingdom
Next Bryan Fischer: America Needs To Ban All Motherfucking Profanity Like Russia Did