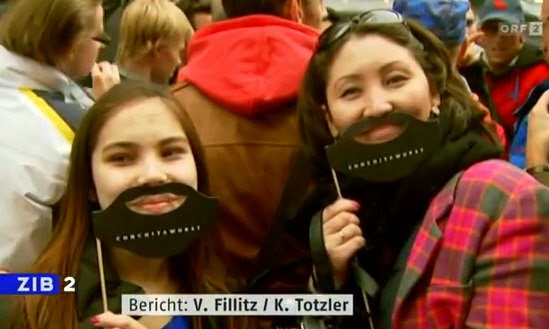 The first Eurovision semi-finals take place tonight in Copenhagen and Austria is promoting gender-fuck artist Conchita Wurst with the above props. Ten of tonight’s 16 nations will advance to the finals. Wurst will compete in the second semi-final round on Thursday, but tonight all eyes will be on the rivalry between Russia and Ukraine.

The Eurovision song contest insists it is strictly nonpolitical, however there is speculation that Russia will face a backlash and fail to qualify in the semi-final round tonight in Copenhagen, due to the country’s aggression towards Ukraine and president Putin’s outspoken homophobia. Russia’s act, 17-year-old twin sisters Anastasia and Maria Tolmachevy who are former winners of Junior Eurovision, and Ukraine’s performer, 21-year-old Maria Yaremchuk, are set to compete virtually back-to-back – with Azerbaijan in between – tonight in the first of the semi-finals.

Below are yesterday’s rehearsals from both nations. For those unaware, Eurovision is wildly popular among gay Europeans and every year many travel to the host cities to attend in person.

Previous PHILADELPHIA: Police Say Gay Man Was Beaten To Death By Grindr Hook-Up
Next One Million Moms Vs Women’s Museum