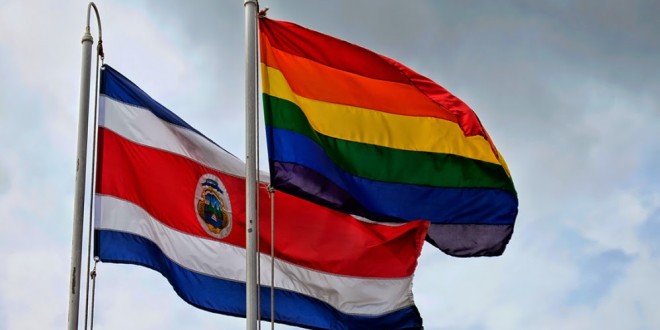 Via the Tico Times:

Just over a week since taking office, President Luis Guillermo Solís made history Friday morning when he became the first Costa Rican leader to raise the rainbow flag of the lesbian, gay, bisexual and transgender movement on even mast with the Costa Rican red-white-and-blue tricolor on the lawn of the Casa Presidencial. Vice President Ana Helena Chacón hoisted the flag in honor of the International Day Against Homophobia and Transphobia, May 17. “This is the house of all Costa Ricans. When we say all Costa Ricans we mean all, without exclusion, without violence, without harassment in absolute respect for the rights of each one,” Solís told a crowd of LGBT leaders and advocates during his brief comments on the lawn.