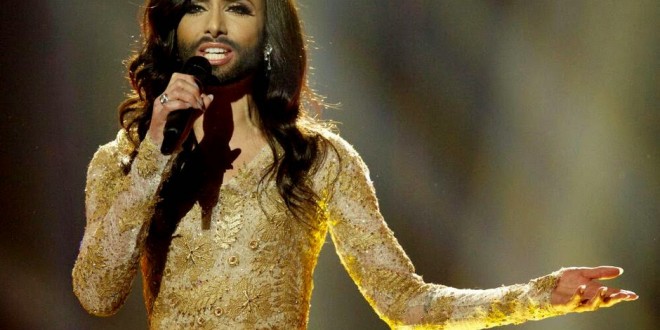 Despite boycott campaigns and anti-gay petitions out of Russia and Belarus, Austrian gender-fuck artist Conchita Wurst tonight advanced to the Eurovision finals in Copenhagen.

With the Second Semi-Final of the Eurovision Song Contest over, the line up for Saturday’s Grand Finale is now certain, and will include Austrian singer Conchita Wurst, who has faced a transphobic backlash from some conservative countries. Before the show, Ms Wurst hit back at critics, including Russian politician Vitaly Milonov, who called her a “pervert.” “I can only say ‘Thank you for your attention!’” she told the Associated Press. “If this is only about me and my person, I can live with it. I’m just a singer in a fabulous dress, with great hair and a beard,” she added. The reception that Russia will receive at the final is likely to be a concern for the show’s organisers, in light of the country’s anti-gay laws, as well as its encroachment into Ukrainian territory in recent weeks. Russian twins Anastasia and Maria Tolmachevy were booed during the first semi-final, while Ukraine’s Mariya Yaremchuk was cheered by the crowd.

The first clip below is tonight’s performance. In the second clip, Eurovision host Lise Rønne kibitzes with Conchita between acts. (Watch for a fleeting shot of beefy Conchita fanboys in the audience.) In the bottom clip, the audience goes wild as Austria is the last of tonight’s finalists to be revealed, prompting the announcer to declare Conchita to be “the queen of Austria.” Twitter wags are accusing Eurovision officials of deliberately naming crowd favorite Conchita last in order to heighten the dramatic effect.