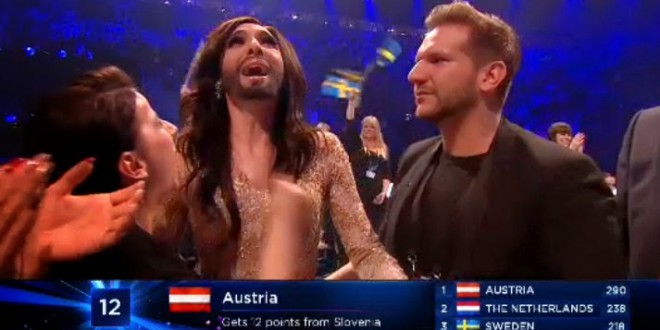 Austrian gender-fuck artist Conchita Wurst won Eurovision 2014 tonight after a stunning performance at the finals held in Copenhagen. The audience was clearly on Conchita’s side during the vote tally and as each nation reported points for Austria, the screaming was crazy. Conchita Wurst: “This night belongs to everyone who believes in a future of peace and freedom. We are unity and we are unstoppable.” What a fantastic FUCK YOU to Russia’s homophobes. I think we’ll see a new category of sadz tonight.

UPDATE: The clip below shows the final votes being announced. Check out the douchey anti-Conchita comment from Lithuania at 9:45. The host immediately smacked him down. Stick around for Austrian announcer right after that – she’s wearing a fake beard in Conchita’s honor, as were many in the audience. At 15:30 the announcers declare that Conchita has won as her lead was then insurmountable.