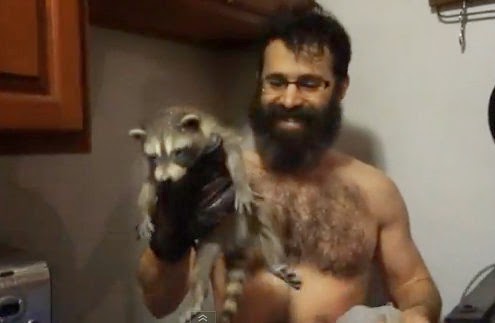 A straight bear, that is. Via the New York Daily News:

Talk about illegal sublets. It took guts for a shirtless William Levin to reach into a tiny hole and pluck a crying, chittering raccoon kit from the wall of his Park Slope apartment, but it had to be done. The baby needed a little help after it fell from its mother’s nest late Monday and got itself stuck in the cramped wall behind the kitchen stove. The couple had been getting ready for bed and there wasn’t time to put on a shirt, Levin told the Daily News. “I don’t know what real man is at home wearing a shirt,” he said. Levins’ wife, Malya, caught the heroic rescue on video as Levin carved a hole with a hammer, reached in and pulled out a screaming kit. He got a good look at the critter when he checked out the baby in the bathroom mirror. The raccoon — a little girl — is believed to be only 5 weeks old.

The raccoon has been sent to an upstate rehabilitation facility and will eventually be released into the wild.