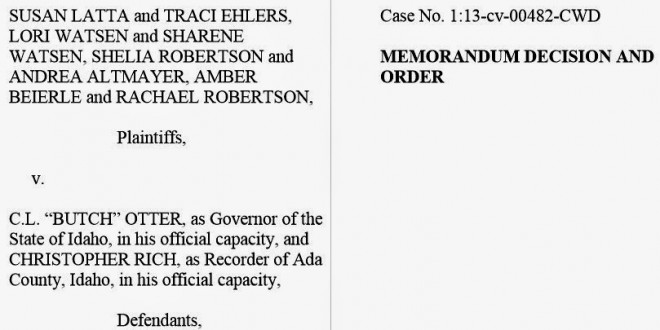 Via the Idaho Statesman:

U.S. Magistrate Judge Candy Dale has ruled Idaho’s ban on gay marriage is unconstitutional. In her 57-page decision, Dale stated, “Idaho’s Marriage Laws withhold from them a profound and personal choice, one that most can take for granted. By doing so, Idaho’s Marriage Laws deny same-sex couples the economic, practical, emotional, and spiritual benefits of marriage, relegating each couple to a stigmatized, second-class status. Plaintiffs suffer these injuries not because they are unqualified to marry, start a family, or grow old together, but because of who they are and whom they love.”

No stay has been issued, but the order doesn’t go into effect until Friday. That effectively gives the state time to get their stay from a higher court.

“In 2006, the people of Idaho exercised their fundamental right, reaffirming that marriage is the union of a man and a woman. Today’s decision, while disappointing, is a small setback in a long-term battle that will end at the U.S. Supreme Court. I am firmly committed to upholding the will of the people and defending our Constitution.”

In the event of an adverse order, Gov. Otter will timely and duly appeal it to the Ninth Circuit Court of Appeals,” the governor’s motion says, and if the 9th Circuit agrees with the lower court, to the U.S. Supreme Court. The motion also raises the possibility that Otter would appeal to the U.S. Supreme Court even before the 9th Circuit has ruled. Arguing for the stay, Otter’s attorney, Thomas Perry, wrote that without it, “There is likely to be a repetition in Idaho of the chaos, confusion, conflict, uncertainty and spawn of further litigation and administrative actions seen in Utah and, to a lesser extent, in Michigan.” Those are both states in which courts have struck down same-sex marriage bans as unconstitutional, prompting gay couples to begin marrying; and then the court orders have been stayed pending appeal, halting the marriages.

“Today’s ruling from the federal court in Idaho is the latest in more than a dozen rulings unanimously holding marriage discrimination unconstitutional. From Idaho to Arkansas, Utah to Michigan, the courts are affirming that there is no good reason for government to deny marriage to committed couples. As gay couples and their families begin to share in the joy and security of the freedom to marry, hearts and minds are opening, discrimination’s barriers are falling, and we’re moving our country to the right side of history. As the federal appellate courts now take up these marriage cases, America is ready for the freedom to marry.”