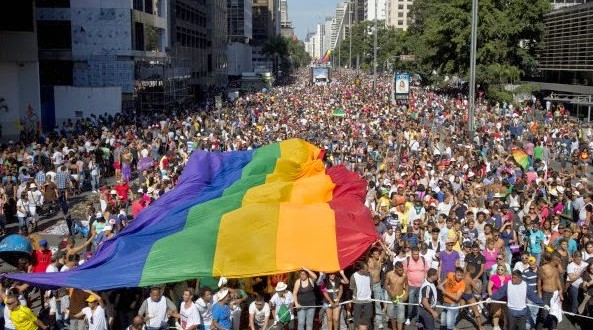 President Dilma Rousseff, who is seeking another term in October elections, gave a message of support via Twitter. “People from around the country are in Sao Paulo today to participate in #paradalgbt,” Rousseff tweeted, reminding her followers there is a hotline people can call in Brazil if they are attacked because of their sexuality. They were surrounded by mainly young, beer-swigging marchers dressed as anything from angels to devils and police officers. “We attended mass in a church near here and then came to the march,” said Cassia Maria, 53. “I am Catholic — apostolic and Roman. But I stick my fingers up against discrimination,” she smiled as her husband viewed on his cellphone footage of examples of physical abuse meted out to gay people in Brazil.

Organizers of the parade claimed three million attendees last year, but local police have contested that number, saying it is impossible to accurately judge the “floating population” of such events.