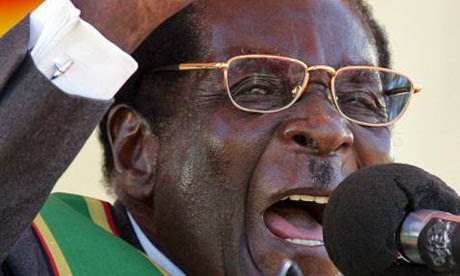 “Some years ago, l was warned that there was some secret organisation of that nature which was addressing young men to join them as homosexuals. This nonsense from Europe, keep their homosexual nonsense there and not cross over with it. We did not fight for this Zimbabwe so it can be a homosexual territory. We will never have that here and if there are any diplomats who will talk of any homosexuality, just tell me. We will kick them out of the country without any excuse. We won’t even listen.” – Zimbabwe president Robert Mugabe, 90, speaking today on the 34th anniversary of his country’s independence from Britain.

Mugabe’s speech also quoted from the biblical story of Adam’s rib, and he threatened to lock gays and lesbians together in a room and not let them out until they make a baby. Zimbabwe is another country that gay people should thank Jesus Christ for, obviously.