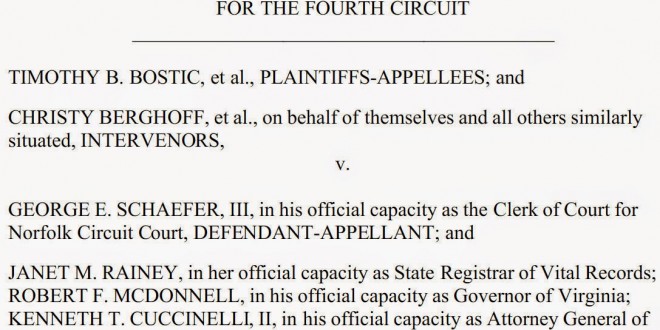 Twenty-one amicus briefs were filed yesterday with the Fourth Circuit Court of Appeals in defense of Virginia’s ban on same-sex marriage. The briefs were filed on behalf of the usual axis of evil: the Concernstipated Women, the Liberty Counsel, Phyllis Schlafy’s Eagle Forum, the United States Conference of Catholic Bishops, the Mormon Church, the Southern Baptists Convention, the Heritage Foundation, the Virginia Catholic Conference, David Barton’s WallBuilders, the Family Research Council, the North Carolina Values Coalition, and the (completely fake) American College of Pediatrics. Also filing briefs are the states of West Virginia and Indiana.

Individuals filing briefs include former NOM chairman Robert George and nutbag homocon Voldemort horcrux Robert Oscar Lopez, who claims that authorities are too afraid of the gay mafia to investigate reports of molestation by gay parents.

Another of the individual filings is from some crackpot named David Boyle who argues, among other deranged claims, that gay people should not be allowed to marry because there was this one time when a lesbian died from “vaginal fisting.” Seriously. Equality Case Files has posted all of the briefs at the first link. There’s surely nothing worth worrying about in any of them since these are pretty much all the same dirtbags who have lost everywhere else. But if you want to amuse yourself, dig into the briefs and recap what you find in the comments. A better way to waste your Saturday, of course, would be to commit some delicious deviant sodomy. But hey, it’s your weekend.