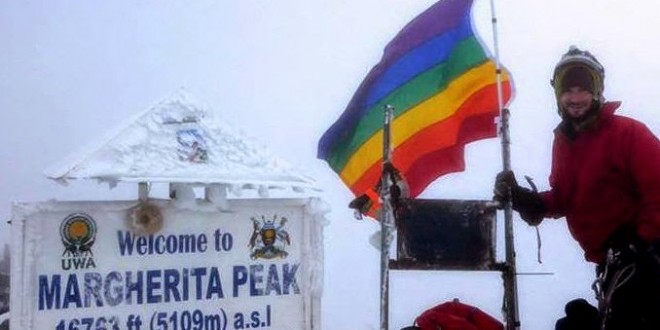 Mountaineer Neil Gottlieb climbed to the summit of Uganda’s tallest mountain, posted a rainbow flag, and claimed the peak in the name of gay rights. He then issued an open letter to President Yoweri Museveni:

On April 16, 2014, after a 6-day climb, I summited your country’s tallest peak, Mount Stanley’s 16,753 foot tall Margherita Peak, and mounted a gay pride flag at its summit in protest of your country’s criminalization of homosexuality. Your country’s highest point is no longer its soil, its snow or a summit marker, but rather a gay pride flag waving brilliantly, shining down from above as a sign of protest and hope behalf of the many thousands of Ugandans that you seek to repress and the many more that understand the hideous nature of your repressive legislation.

The wiser of us understand that humans possess certain unalienable rights. These rights include freedom to express oneself, freedom to worship one’s god or none at all and freedom to live and love as one is born. Despite this, you recently signed legislation into law that allows those born homosexual to be imprisoned for life. This is a disgusting, despicable act that threatens to ruin countless lives. If you had a son, daughter, niece or nephew that was homosexual, would you want her or him to be imprisoned for life? What if you have friends that are closeted homosexuals? Should they be locked up for the rest of their lives? If you were born gay, would you deserve to be imprisoned?

Gottlieb’s letter closes by suggesting that if Museveni doesn’t want that rainbow flag on Uganda’s highest peak, he should climb up there and rip it down himself. In order to shield the mountain guides that assisted in the Gottlieb’s climb, he notes that they had no idea what he was planning and didn’t even know what the rainbow flag represents. (Via Gay Star News)