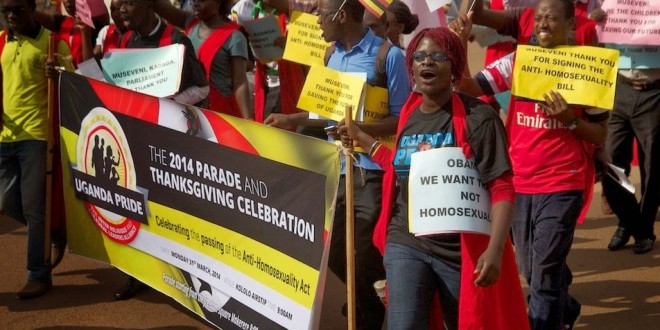 On Saturday Ugandan Pastor Martin “Eat Da Poo Poo” Ssempa smirkingly invited me to attend a parade in celebration of his country’s brutal crackdown on its LGBT citizens. The festivities went off as planned yesterday, complete with a marching band and children that waved anti-gay signs.

Fire jugglers, acrobats, and schoolchildren performed at a five-hour ceremony in the Ugandan capital on Monday called to celebrate the country’s new Anti-Homosexuality Act. Speakers paid tribute to President Yoweri Museveni, the official guest of honor, and linked Uganda’s fight against homosexuality with shedding its colonial past in an event that had the feeling of a campaign rally. [snip The event, called the “National Thanksgiving Service Celebrating the Passing of the Anti-Homosexuality Bill,” was organized by the Inter-Religious Council of Uganda (IRCU), an umbrella organization of the country’s major denominations, and other groups that had supported the bill, which punishes homosexuality with up to life in prison and essentially bans LGBT advocacy. The event comes amidst several moves by Museveni to consolidate his position as the unchallenged leader of Uganda and his National Resistance Movement party ahead of presidential elections in 2016.

Feder notes that President Musevni spoke at the event, which was also attended by numerous members of the Ugandan national legislature and other government officials. After Museveni told the crowd that gay sex causes intestines to fall out, he added another denouncement: “Oral sex is an idiocy, the mouth is for eating.” Read much more and view many more photos at Feder’s excellent report.