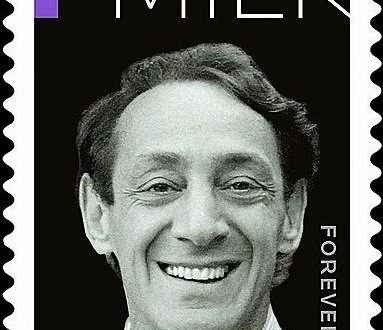 I’m not finding confirmation elsewhere, but yesterday a philatelist site declared that this is the Harvey Milk stamp which will makes its debut next month.

A black-and-white photograph of Harvey Milk (1930-78) will be used for the central design of the forthcoming United States commemorative forever stamp honoring the San Francisco political figure and gay rights activist. The stamp will be issued on Harvey Milk Day, May 22, in a location or locations yet to be determined. Both Washington, D.C., and San Francisco are potential first-day cities. U.S. Postal Service officials announced the stamp subject in October 2013 but have not formally revealed the image. The stamp design includes the pride flag colors as six different color squares stacked vertically in the upper left corner. The stamp is likely to be issued in a pane of 20.

If this indeed is the official version, it’s a great improvement over the stamp that the same site showed us last year.