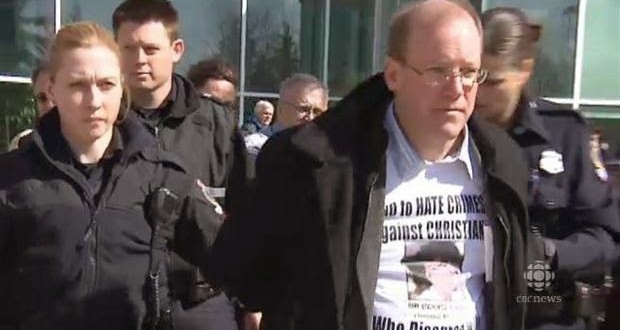 Before their arrival, the university issued a news release saying the pair would be monitored to ensure they did not engage in any activity that would promote hatred. At one point, with news cameras rolling, an unidentified university official approached Whatcott, 46, and LaBarbera, 51, and asked them to leave. During that encounter, Whatcott said he had attempted to get permission to set up an information table and, since he was denied, proceeded to set up a table anyway. “I’m not leaving,” Whatcott told the official, “You guys are intolerant and should be ashamed of yourselves for shutting down our message without even considering it.”

Activists for every cause routinely stage their own arrests by willfully breaking the rules. But out in Teabagistan today, faux outrage is running at the usual fevered pitch.