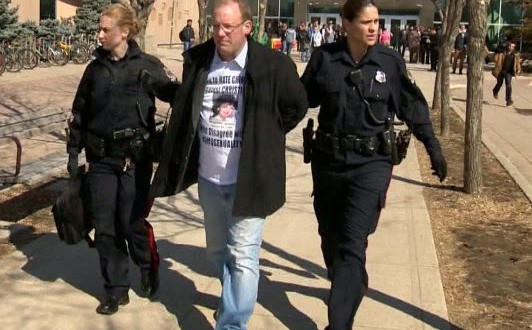 When activists stage their own arrests they are typically released later the same day or the next morning after being given desk appearance tickets or assigned court dates. Not so for Peter Labarbera, who is still in jail according to Canadian anti-gay crackpot Bill Whatcott, who was arrested with LaBarbera yesterday. Early this morning Whatcott posted a message to the wingnut forum Free North America:

Please pray for Peter. I have been released on my own recognizance and have to appear in court to answer to these charges on May 26th. Peter on the other hand remains in custody and is facing a hearing tomorrow before Border Services. Notwithstanding, I am Peter’s co-accused, our lawyer Tom Schuck has requested I act as Peter’s counsel at the immigration hearing. I have no idea where the hearing is going to be held, but I do have the case law (all of it my own) that I can present to the Immigration Arbitrator and hopefully convince him/her that indeed Peter and I have reasonable grounds to believe we were not violating the law and hopefully I can get Peter released from custody tomorrow on his own recognizance, so he can leave Canada on his own. Please pray for this.  Seeing as Tom requested I act as Peter’s counsel, I have to call off my prophetic witness and book promotion at the University of Saskatchewan. None the less, just as General Douglas MacArthur said, “I will return.”

This explains why the normally prolific Twitter user has been silent since his arrest. They don’t let you keep your cell phone in jail. It’s not clear where LaBarbera is being held, but here’s a photo of the jail in Regina, Saskatchewan.