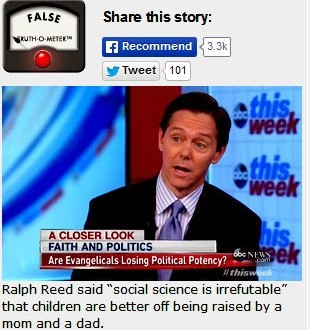 On Sunday, Ralph Reed appeared on ABC’s This Week to declare that social science has found “irrefutable” proof that children are better off being raised by a mom and a dad. PolitiFact has rated his claims as totally false.

We did find one study funded by conservative organizations as showing gay parents are worse than straight ones, but it’s been denounced by the American Sociological Association, the researcher’s own university and many reputable sociologists. In conducting the study, Mark Regnerus loosely defined same-sex couples and, in doing so, only spoke with two children who were actually raised by gay parents. Research is still limited, but many reputable studies so far have concluded that children of gay parents, generally speaking, are just as well off as children of straight parents. What’s more important is the number of parents a child has, experts told us. “Kids are better off with two parents,” said Andrew Cherlin, a sociology professor at Johns Hopkins University. “But we don’t have much evidence that those parents must be of the opposite gender.”

Their final ruling: “All reputable research so far indicates that children brought up by gay parents are just well off as those brought up by straight parents. We rate Reed’s statement False.”