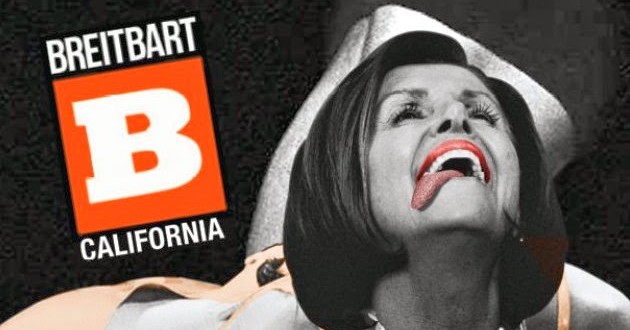 House Minority Leader Nancy Pelosi shook her head in disgust Monday afternoon when asked about an advertisement released by Breitbart.com, a conservative political Web site, that features her face superimposed onto a sexually suggestive image. The image, one of several advertisements for “Breitbart CA” — a new, California-focused offshoot of the site — drew ire throughout the day. Asked about the image following a news conference, Pelosi (D-Calif.) responded: “So tasteless, that .. I mean, is it even worthy of a question. It’s so undignified.”

DNC Chairwoman Debbie Wasserman-Schultz has called on GOP figures to boycott Breitbart  until the images are removed.

“If GOP leaders are serious about their rebrand, then both their elected and Party leadership should condemn this outrageous behavior, call on Breitbart News to immediately remove the ad, and not continue to use this website as a forum for their views,” Wasserman Schultz said in a statement. “To say the least, the Breitbart News ad is foul, offensive, and disrespectful to all women. It is a disgusting new low and would be reprehensible against any woman — regardless of party.”

Breitbart has responded by publishing a lengthy recounting of the ways that Republican women have been mocked by liberal commentators and comedians. An excerpt:

Previous This Week’s New Yorker Cover
Next Pat Robertson: If Brendan Eich Is Wrong Then The Bible Is Full Of Hate