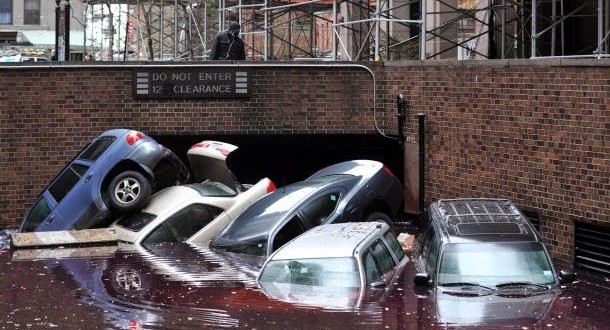 This won’t come as a surprise to anybody who lived here during Hurricane Sandy. Via Mashable:

In a sign of the shift to a riskier coastal flood environment in New York, one which is mirrored in many low-lying coastal cities worldwide, the study found that three of the nine highest recorded water levels in the New York Harbor region since 1844 have all occurred since 2010, and eight of the largest 20 such events have occurred since 1990. This is no coincidence, says Stefan Talke, a civil engineer at Portland State University and lead author of the study. The annual probability that a storm, such as a winter nor’easter or a summer hurricane, will overtop the typical Manhattan seawall has increased about 20-fold since 1844, Talke told Mashable, going from less than 1% a year in the 19th century to about 20-25% today. That means that waters can be expected to top the lower Manhattan seawall, which is about 5.7 feet high — once every four to five years, according to a summary from the American Geophysical Union (AGU). That’s up from once every 100-400 years back in the late 19th century.

Last year former Mayor Bloomberg proposed a $20B plan to bolster the city’s seawalls. The plan calls for an extensive network of barriers, levees, and bulkheads along parts of the city’s 520 miles of waterfront. Also proposed are inflatable plugs for tunnel entrances. Mayor De Blasio had not yet indicated if he will follow through.

RELATED: I took the below photo of the eight-lane FDR at the end of my block just after Sandy had passed.