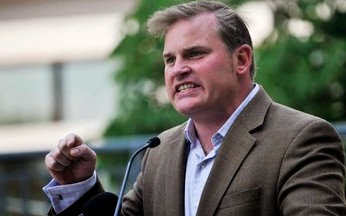 “When Brendon Eich made his modest contribution to support Proposition 8, Barack Obama was on the ballot as a candidate who said he believed marriage was the union of one man and one woman. Now Eich has been the target of a vicious character attack by gay activists who have forced him out of the company he has helped lead for years. This is a McCarthyesque witch hunt that makes the term ‘thought police’ seem modest. We urge all consumers to remove Mozilla’s Firefox web browser from their computers as a sign of protest. This attack to deny Mr. Eich his livelihood for supporting true marriage is a continuation of the shameful pattern we have consistently seen from gay activists. It basically says to all those in America and around the world who believe in a view of marriage that is consistent with the teachings of their faith that they are all bigots and haters and there is no place for them in civil society. This is the totalitarian worldview we will all be under if marriage ultimately is redefined in the law.”

VERY FUCKING RELATED: Two years ago NOM launched their continuing boycott of Starbucks after the company issued a statement endorsing marriage equality in Washington state. Several months after the boycott started, hate group leader Tony Perkins declared to his national radio audience that NOM’s boycott had cost Starbucks over $10B in stock value.

It didn’t take long for Starbucks to lose bucks over marriage. Hello, I’m Tony Perkins of the Family Research Council in Washington. In January, Starbucks CEO Howard Schultz said endorsing same-sex marriage would be good for business. Boy was he wrong! Siding with radical homosexuals has its price in this country. And in Starbucks case, the cost is about ten billion dollars. That’s how much the coffee giant’s lost in stock value since the campaign to Dump Starbucks got underway. In the last eight months, the company’s missed sales projections and watched stocks dive from $61 to $48, for a loss of more than $10.2 billion. How many companies will fall for the lie that endorsing same-sex marriage will help business? J.C. Penney’s tried it. Target’s tried it. Now Starbucks. And every time, there’s a reason to believe that alienating millions of customers will directly affect a company’s bottom line. On the flip side, look at Chick-fil-A. They found out that supporting traditional values pays just as many cultural dividends as financial ones.

Brian Brown and his clown car of evil are trying to sell the claim that they are super concerned about evil homofascsists destroying the livelihood of Brendan Eich, but they bragged about having caused a $10B stock loss that may have devastated the investment portfolios of uncountable retirees, families, and pension funds. So what if thousands of people who also oppose same-sex marriage suddenly saw their nest eggs dwindle? And if a dive in stock price prompted Starbucks to enact massive layoffs among straight minimum wage workers? Serves them homos right.

The truth, of course, is that NOM’s boycott had nothing to do with the price of Starbucks stock and everything to do with the volatility experienced by much of the restaurant sector at that time. In early 2012 at the start of NOM’s boycott, Starbucks traded at $43. It closed today at $71.55. That’s a 66% increase. Other companies are probably lighting candles in the hope of a boycott from NOM.

But all that is only part of the story.

Shortly after NOM’s boycott of Starbucks began in America, Brian Brown posted a gloating update in which he announced that NOM had purchased Arabic-language banner ads to promote the boycott on websites based in several Middle Eastern countries that carry the death penalty for homosexuality. His intent, obviously, was to whip up anti-gay sentiment in places where our brothers and sisters already lead lives of quiet terror at best. Perhaps he even hoped for a madman to take out the entire staff at one of those overseas Starbucks. THAT would send a message back home, huh?

REMINDER: When major national Christian groups with millions of followers call for boycotts,
that is a righteous use of the free market in order to preserve
morality, marriage, family, and the American way. But if a gay keyboard activist tweets a
call for a boycott, THAT is homofascist intimidation, intolerance,
bullying, a stifling of religious liberty, and an attempt to deny the
freedom of speech. And don’t you forget it.