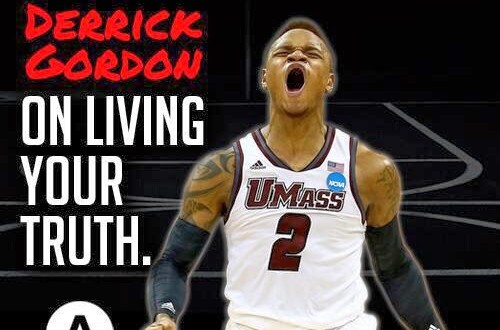 ESPN has the story:

Derrick Gordon, a sophomore starter for the University of Massachusetts men’s basketball team, stepped forward Wednesday as the first openly gay player in Division I men’s college basketball, sharing his story with ESPN and Outsports. The 22-year-old shooting guard came out to his family, coaches and teammates in the span of just a few days at the beginning of April. That’s when he also decided to publicly acknowledge his sexuality. I just didn’t want to hide anymore, in any way,” Gordon told ESPN. “I didn’t want to have to lie or sneak. I’ve been waiting and watching for the last few months, wondering when a Division I player would come out, and finally I just said, ‘Why not me?'”

Gordon says he was inspired to come out by Brooklyn Nets player Jason Collins. He came out to his teammates last week and his school is behind him.

“UMass is proud to have Derrick Gordon as a member of our athletic family and to honor his courage and openness as a gay student-athlete,” athletic director John McCutcheon said in a written statement. “UMass is committed to creating a welcoming climate where every student-athlete, coach and staff member can be true to themselves as they pursue their athletic, academic and professional goals.”

Previous Mike Huckabee: I’m Not Homophobic, I’m On The Right Side Of The Bible
Next Chick-Fil-A CEO Dan Cathy On Shutting Up About Gay Marriage: I’m More Wise Now