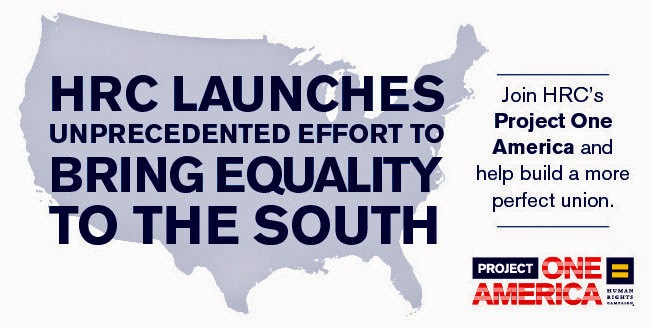 Today, the Human Rights Campaign (HRC) announced Project One America (POA), a comprehensive campaign to dramatically expand LGBT equality in the South through permanent campaigns in Mississippi, Alabama and Arkansas. This substantial and lasting initiative—with a three year budget of $8.5 million and a dedicated staff of 20—is the largest coordinated campaign for LGBT equality in the history of the South.

“Right now, this country is deeply divided into two Americas—one where LGBT equality is nearly a reality and the other where LGBT people lack the most fundamental measures of equal citizenship. Project One America is an unparalleled effort to close that gap, and it opens up a bold, new chapter in the LGBT civil rights movement of this generation. In this grand struggle for equality, we can’t write off anyone, anywhere,” said HRC President and Arkansas native Chad Griffin.

Project One America is the very first campaign of its kind to work exclusively on LGBT equality in Mississippi, Alabama and Arkansas—where there are no non-discrimination protections for LGBT people at the state or local level in employment, housing or public accommodations, and where each state’s constitution expressly prohibits marriage equality.

“Despite the legal landscape, it’s long past time that the country stopped treating the South like the ‘finish line’ for equality. HRC has more than 57,000 members and supporters in these states, and there are millions more fair-mined people ready to stand on the right side of history,” Griffin said.

The Associated Press has more:

A national organization is launching a three-year, $8.5 million campaign to promote LGBT equality and push for new legal protections in three Southern states dominated by conservative politics and religion and known for resistance to change: Alabama, Arkansas and Mississippi.

Decades after groups used boycotts, marches, sit-ins, pickets and mass rallies to end legalized racial segregation and push for equal protection for blacks, the Washington-based Human Rights Campaign is planning a new kind of civil rights movement. It’s one based on using chats and front-porch visits between relatives and friends to foster an environment more welcoming toward people of all sexual orientations.

The idea is simple, and it’s borne out in polls: People are less likely to oppose expanded rights and acceptance if they know and care for someone who’s gay. Activists hope that’s particularly true in a region that values hospitality.