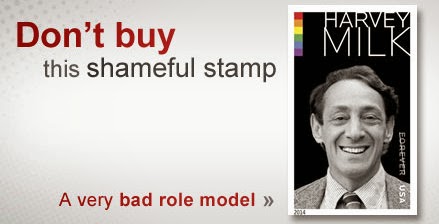 Haters Have The Harvey Milk Sadz

“Harvey Milk was a very dishonorable man — a sexual anarchist who hated sexual boundaries, a homosexual predator of teens and boyish-looking young men, and a brazen attacker of moral standards and parental rights. The intolerant homosexual-bisexual-transsexual movement is guilty of trampling religious freedom, free speech, private property rights, parental rights and the innocence of children, If you believe in protecting children from bad role models, don’t buy the Harvey Milk stamp. Harvey Milk’s ‘LGBT’ agenda has been an extremely negative influence on religious freedom, which it crushes, and the health and well-being of children, whom it sexually targets,. Indeed, a moral disaster — the unnatural, unhealthy, tyrannical homosexual-bisexual-transsexual agenda — is being honored by the U.S. Postal Service, which is pushing negative outcomes on children through this harmful sexual movement.” – Save California crackpot Randy Thomasson, renewing his annual call for parents to keep their kids out of school on next month’s Harvey Milk Day. (Via Good As You)

Previous UGANDA: Climber Claims Nation’s Tallest Mountain In The Name Of Gay Rights
Next Courtney Love – You Know My Name