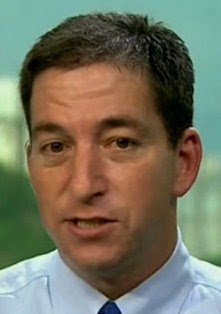 Gay journalist Glenn Greenwald returned to the United States today for the first time since breaking the Edward Snowden story. Some have called for his arrest as Snowden’s alleged co-conspirator. Greenwald himself said he expected to be detained at once, but he exited JFK airport without incident. TIME reports on the reason for today’s visit:

Glenn Greenwald and Laura Poitras, who broke the Snowden story and met with the whistleblower in Hong Kong, are in New York City to receive the prestigious George Polk Award. Greenwald, formerly a columnist for The Guardian and now a partner in the upcoming First Look Media venture, and Poitras, a documentary filmmaker, will share the journalism award with Ewen MacAskill of The Guardian and Barton Gellman of the Washington Post, the Huffington Post reports. Greenwald, who currently resides in Rio de Janeiro, told The Huffington Post that he wanted to return to the U.S. because “certain factions in the U.S. government have deliberately intensified the threatening climate for journalists.” He noted that language used by government officials suggested that reporters who investigated Snowden’s documents were complicit with him.