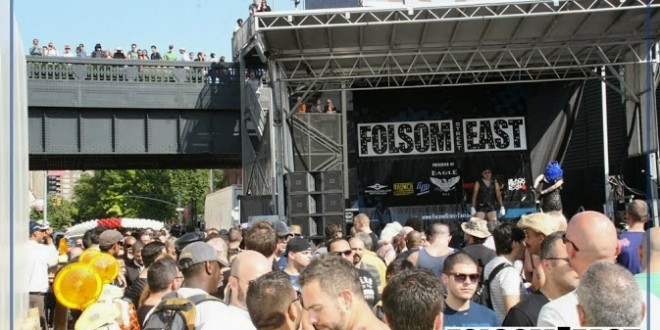 Folsom Street East didn’t happen last year due to the massive apartment building that is nearing completion on West 28th Street. The event returns this year, one block away. Via press release:

Folsom Street East (FSE) today announced that it will hold its 16th annual Street Fair on Sunday, June 22nd. In anticipation of final approval from the City of New York’s Street Activity Permit Office, FSE also announced that this year’s Street Fair will take place on 27th Street between 10th and 11th Avenues, one block south of its previous venue. “We’re thrilled to bring Folsom Street East back to the streets of New York City,” said FSE Board President and Street Fair coordinator Gary Martin. “We believe that 27th Street will be a great new venue for our event and are confident that our final permit will be approved in light of Community Board 4’s unanimous recommendation to SAPO earlier this month that it go forward.” This year’s Street Fair will benefit the Anti-Violence Project, Housing Works, the National Coalition for Sexual Freedom, and the HIV/AIDS-related services of The Center. The fair will be held from 11 AM – 4 PM, and feature 2 hour stage show starring New York’s finest entertainers – bookings to be detailed in advance of the event. As in years past, attractions will also include a beer garden hosted by the Eagle NYC.

RELATED: If you’d like a brand new apartment with views of the Eagle and the city’s most famous titty bar, a studio will run you up to $4000.