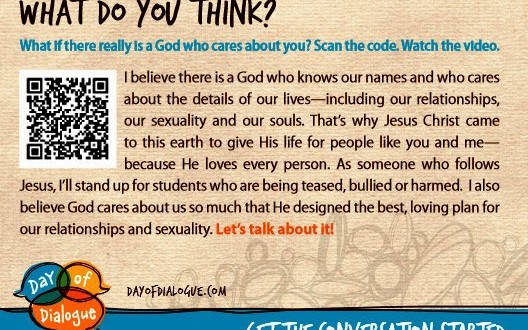 Focus On The Family: More Christian Tips On How To Bully LGBT Students

As I noted last month, Focus On The Family is gearing up for their so-called Day Of Dialogue, which was created several years ago to counter GLSEN’s anti-bullying Day Of Silence, which takes place this year on April 11th. Previous Day Of Silence protests have included walkouts by Christian students, protests by church groups, and email campaigns to public school districts. Day Of Silence walkouts were promoted again last year by the American Family Association, which issued a call to its millions of followers, telling parents to pull their kids out of school and to write complaining letters to teachers and principals.

Focus On The Family has created a website where students can download proselytizing flyers to be handed out at public schools on the Day Of Dialogue. As you can see above, the flyers laughably claim that their campaign opposes bullying and feature a QR code which links to their “ex-gay” brainwashing clips. FOTF has also posted several pre-event training videos, such as the new one below, in which Christian students role play how to “respectfully” tell gay kids that they are bound for an eternity in a lake of fire. But that’s not bullying in the world of anti-gay hate groups, that’s doing those confronted children a favor.

Previous BERLIN: Lesbian Cemetery To Open
Next Bumper Sticker Of The Day