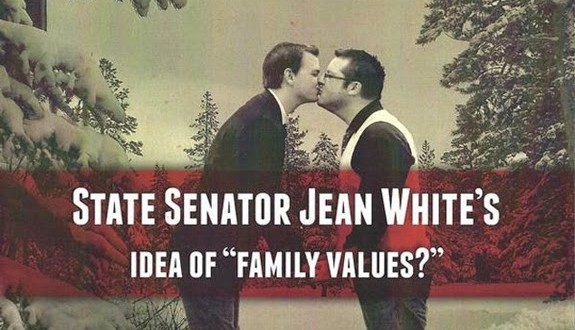 Back in 2012, Virginia-based anti-gay crackpot Eugene Delgaudio lifted the above wedding photo from the blog of a New Jersey gay couple, replaced the New York City skyline backdrop with snow-covered trees, and used the image for a flyer that attacked a pro-gay marriage candidate for the Colorado state Senate. After first sending an cease-and-desist order, in September of that year the Southern Poverty Law Center filed a federal copyright infringement lawsuit against Delgaudio.

This morning Delgaudio issued a triumphant press release which opens by declaring that he has won his motion to dismiss on one of the suit’s two claims.

Yesterday, Monday, March 31, in Denver, Colorado, senior federal district judge Wiley Y. Daniel dismissed with prejudice one of two claims brought against Public Advocate by two homosexuals represented by lawyers from the leftist Southern Poverty Law Center (“SPLC”). SPLC lawyers had demanded a large money judgment for Public Advocate’s use of a photograph of those two homosexuals in a mailing against pro-homosexual candidates for state office. The judge ruled for Public Advocate, finding that it had no commercial purpose in using the photograph, as it was involved in an important exercise of its First Amendment rights with respect to a controversial issue in the context of an election. The candidates opposed by Public Advocate were defeated in that election. The court ruled that “Public Advocate[‘s] actions are evidence that same-sex marriage can at the very least be considered as relating to political concerns of the community. Therefore, I find that the mailers reasonably relate to a matter of public concern.”

After careful consideration of the matters before this Court, it is ORDERED that Public Advocate’s Motion To Dismiss Plaintiffs’ First Amended Complaint [ECF No. 101] and NAGR, Rocky Mountain, O’Dell, Andrew Brown, and Dudley Brown’s Motion To Dismiss The First Amended Complaint [ECF No. 106] are GRANTED IN PART and DENIED IN PART. The motions are GRANTED to the extent that the First Amendment bars the Plaintiffs’ Colorado state law appropriation of name or likeness tort claim, and that claim is DISMISSED WITH PREJUDICE. The motions are DENIED to the extent that Public Advocate and the Defendants seek dismissal of the Plaintiffs’ copyright infringement claim based on the fair use doctrine.

The 18-page ruling is here. These things tend to make my eyes cross, so perhaps some legal eagles here on JMG can dig in and tell us what may happen next. Delguadio, of course, has issued a money beg to continue his defense.

Previous Matt Barber: Revolution Is At Hand
Next Glenn Beck: The Obama Administration Is Killing Christian Thought In America