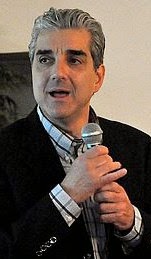 “Chelsea Clinton is having a baby, she announced it and lo and behold, Hillary was by her side. Hillary is going to be a grandmother. And an expected grandmother while she runs for president. I don’t mean that they’re making up she’s pregnant, OK? But what great timing! I mean, purely accidental, purely an act of nature, purely just left up to God, and God answered Hillary Clinton’s prayers and she’s going to have the prop of being a new grandma while she runs for president.” – Wingnut radio host Steve Malzberg, speaking on yesterday’s show.

Previous TRAILER: The Normal Heart
Next Tweet Of The Day – Brian Brown