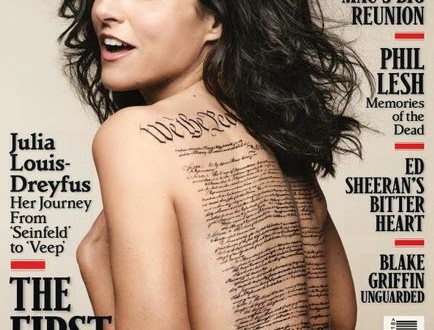 Wingnut sites like Breitbart are screaming bloody murder, but the magazine says “mistake” was on purpose.

A source at Rolling Stone, however, said the John Hancock signature was deliberate and was meant to be “in the spirit” of Veep’s farcical tone. “The Declaration of Independence is on the other side, but we couldn’t fit all the signatures on there,” the source said.

Breitbart ignores this, of course, and throws in a dig at gay marriage.

If anyone in the “Rolling Stone” editorial machine had bothered to crack open an American history book, they would know that John Hancock signed the Declaration of Independence, not the Constitution. It’s what you might call an anti-science “Rolling Stone” cover and probably explains why the Left in general sees things in the Bill of Rights that aren’t there — abortion and same-sex marriage — but can’t seem to see the 2nd Amendment.