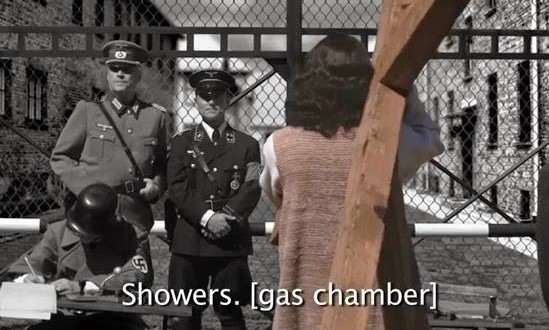 To mark Easter, Jews For Jesus have created a short film which depicts a cross-dragging Jesus being sent to the gas chambers by Nazi guards at a concentration camp. They write:

Jesus has often been wrongly associated with the perpetrators of the Holocaust. In reality, he is to be identified with those who were the victims. As a Jew, if he were in Europe at the time, Jesus may well have suffered the same fate of the six million who perished in the concentration camps. Jewish teaching promotes the idea that the death of Jews in the Holocaust accomplished kiddush ha Shem, the sanctification of God’s name. How much more then, the Bible tells us, Jesus’ death was intended by God for kiddush ha am, the sanctification of the people. Through him we can be made right with God.