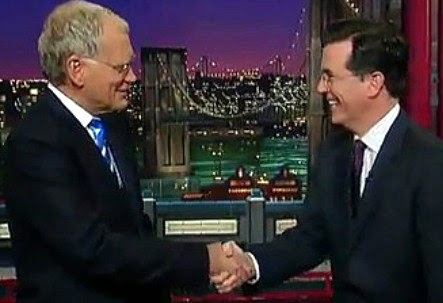 Stephen Colbert will succeed David Letterman when the Late Show host retires some time next year.

When Colbert sits behind the desk of the CBS program, as he is set to do at a currently undetermined date in 2015, he will likely do it in unvarnished fashion, not as the right-wing caricature he plays in his current perch on Comedy Central. CBS said creative elements, producers and even the location of the show will be announced at a later date. And yet, it is that inventiveness CBS is likely banking on to help it gain in the ongoing late-night wars. Indeed, Colbert will be the Eye’s entry into a race that has already started. Both ABC and NBC have already turned their latenight programming over to younger hosts – Jimmmy Kimmel for the Alphabet and Jimmy Fallon at the Peacock. Colbert will have to hit the ground running, mastering a new format while trying to maintain the current fan base that has made his “Colbert Report” a mainstay for the Viacom-owned network.

Colbert has issued a statement: “Simply being a guest on David Letterman’s show has been a highlight of my career. I never dreamed that I would follow in his footsteps, though everyone in late night follows Dave’s lead.”

Previous Christian Website: Honey Maid Will Be Sorry For Their Ads When Jesus Returns
Next INDIANA: Federal Court Orders State To Recognize Marriage Of Ill Woman