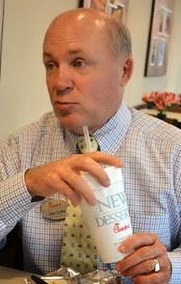 Cathy, whose comments condemning gay marriage in 2012 set off store picketing and a social media firestorm, has now fully backed away from such public pronouncements that mix personal opinion on social issues with corporate policy. “All of us become more wise as time goes by,” he says, apologetically, in a rare, one-hour sit-down interview. “We sincerely care about all people.” About two years ago, Cathy made headlines after conceding to being “guilty as charged,” in confirming Chick-fil-A’s support of the traditional family. Both ardent supporters and angry picketers showed up at stores. While Cathy’s comments didn’t hurt short-term business — and even helped it — Chick-fil-A executives recognize that the comments may have done longer-term damage to the brand’s image at the very time it was eyeing major growth outside its friendly Southern market.