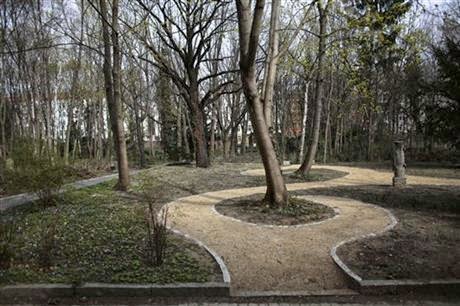 A cemetery for lesbians will open outside of Berlin on Sunday. The project, which is on the grounds of a Lutheran Church, has been criticized in the German press by writers who characterize its backers as lesbian separatists.

“We are the first real generation of emancipated, feminist, open lesbians, and we need somewhere to be buried,” said Dr Astrid Osterland from Safia, an association for older, mostly gay women. Hitting back at criticism of the burial area in the Georgen-Parochial-Friedhof, Osterland explained that the project had “absolutely nothing against men”. They are welcome to have their urns here, but women will get first pick of the plots, the 69-year-old said, who has her own spot reserved. “There is no reason to be buried anonymously anymore and like everyone else, I want to lie with the people I’ve fought with,” she said. This was, she explained, logistically easier in a specific cemetery.

Safia has about 500 members. The group’s leader says that there are no “strict rules” barring heterosexuals or gay men from being buried in the cemetery. More about the arrangement:

The group was given use of the cemetery area for 30 years in exchange for cleaning up and landscaping the area, and promising to be responsible for its upkeep. In Germany is it customary to have long-term, renewable leases on burial plots rather than buy them outright. “We don’t have to pay any rent, but we had to invest a lot of money to turn that part of the cemetery into a usable burial ground again,” Zachau said Tuesday. The group commissioned a landscaping company to build winding sand paths and has reserved spaces for cremated ashes in urns and for the burial of bodies. The area is framed by oak, birch and yew trees.

News about the project has reached American right-wing sites, which are reacting as you would predict.

Previous BROOKLYN: Cater-Waiter Sues Houston Rockets Over Homophobic Taunting
Next Focus On The Family: More Christian Tips On How To Bully LGBT Students