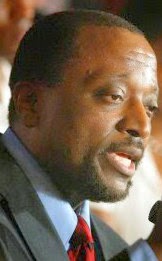 Alan Keyes: Liberals Who Point Out Cliven Bundy’s Racism Are The Real Racists

“I find it appalling that we basically have a history of the leftist liberalism that wants to extinguish black people by abortion [and] destroying the family structure. All of these things if you just look at the effects, you would say this was planned by some racist madman to destroy the black community. Then when somebody comes along to comment on that damage, the leftists all scream ‘racism.’ I think it’s time somebody started to recognize the racism that exists in its effects – the hard leftist ideology using the black community for their sacrificial lamb, for their sick ideology. It’s time we called them what they are. Now it’s racist to point it out.” – Three times failed presidential candidate and three times failed Senate candidate Alan Keyes, speaking to World Net Daily.

Previous Professor Vs Creationists
Next Glenn Beck: The Bible Is The Only Textbook Needed By Public Schools