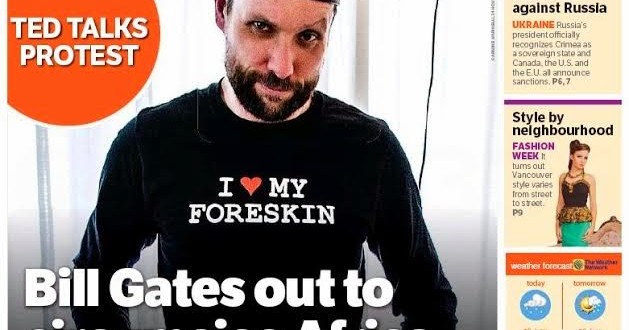 Bill Gates is the most highly anticipated speaker at the TED Talks in Vancouver on Tuesday – but the Microsoft founder’s philanthropic work is being protested by “pro-foreskin” activists. The Canadian Foreskin Awareness Project has criticized a program funded by the Bill and Melinda Gates Foundation, which it said granted more than $160 million for 14 African countries’ HIV/AIDS prevention programs encouraging male circumcision. “Circumcision does not prevent HIV,” said group founder Glen Callender. “Bill Gates means well, there certainly are things he’s doing that I fully support, but I do not agree that circumcision is a valid or reasonable approach for 21st-century AIDS prevention.” He argued circumcision can create scar tissue and remove many sensory nerves in the penis. For University of B.C. Medicine’s Dr. Richard Lester, the evidence linking HIV and circumcision is nearly unanimous – “as clear as you really can get in medical research,” the division of infectious diseases researcher said.

RELATED: Circumcision for HIV prevention has been praised by Hillary Clinton. Bill Gates has donated more than $25M to the Clinton Foundation, which works on HIV/AIDS causes in Africa, among other projects. In 2012 the American Academy of Pediatrics shifted its position on circumcision, saying that “the medical benefits outweigh the small risk for baby boys.” Also in 2012, a study by Johns Hopkins University declared that the declining US rate of circumcision would ultimately result in a higher incidence of STDs. That study was denounced by intactivists.