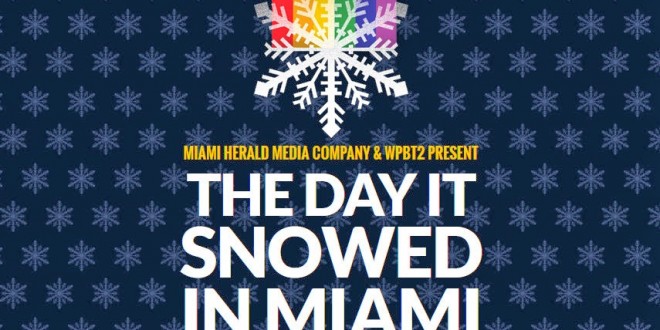 TRAILER: The Day It Snowed In Miami

Especially relevant in light of today’s passing of former Florida Gov. Reubin Askew, coming soon to PBS is a documentary about Anita Bryant and Miami’s famed battle for LGBT rights. The film premiered last week in Miami Beach. For those too young, some back story:

As promotion of civil rights for African Americans, women and other disadvantaged groups expanded, a handful of gay communities, notably in New York and San Francisco, started to speak out. None of those communities, however, were in the South. It was not a gay public official who brought the issue to Miami; there were virtually no openly gay public officials in those days save for San Francisco’s supervisor Harvey Milk. It was a Metro Dade County commissioner, Ruth Shack, who proposed an ordinance to protect county residents against employment and housing discrimination on the basis of “affectional or sexual preference.” She just thought it was the right thing to do. The measure passed on the frigid night of Jan. 18, 1977. The next morning, it snowed for the only time in Miami’s recorded history.

A backlash quickly ensued, led by Anita Bryant. She was a 1959 Miss America runner-up who went on to a moderately successful singing career. By 1977 her main gig was as a TV spokeswoman for Florida orange juice. Bryant and her husband at the time, Bob Green, were evangelical Christians. (Ruth Shack’s husband happened to be Bryant’s booking agent, until he resigned amid the gay-rights battle.) Backed by an assortment of church groups, Bryant’s organization, Save the Children, Inc., quickly gathered far more than the necessary 10,000 signatures to put the new ordinance to a referendum. A few months later, with a heavy turnout, voters repealed the law by a 2-1 margin.

The film debuts nationwide on PBS later this year.

Askew, according to his obit in the Miami Herald, was a “fiercely determined advocate” for racial equality. He was no friend to the gay community. As documented in the new Miami Herald/WPBT2 film by Joe Cardona, The Day It Snowed In Miami, Askew firmly stood by friend Anita Bryant and supported repeal of Miami-Dade County’s gay-rights ordinance. Said Askew in 1977: “If I were living in Dade County, I would have no hesitation in voting to repeal the ordinance. I do not want a known homosexual teaching my child and I think that a person ought to have the right to determine whether or not they want someone with that known lifestyle living on their premises.” Two years later, during his confirmation hearing to be U.S. Trade Representative under President Jimmy Carter, Askew testified in the Senate that he would not knowingly hire a gay person.