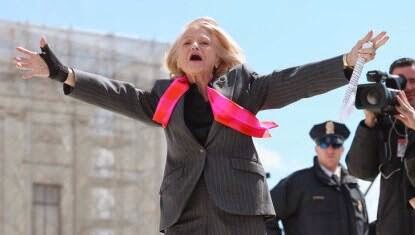 One Year Ago Today

One year ago today, Edith Windsor emerged from the doors of the Supreme Court to the wild cheers of hundreds of adoring fans following oral arguments in United States Vs Windsor. Three months later the Supreme Court ruled in Windsor’s favor, setting off an avalanche of pro-LGBT changes by the federal government and a still unbroken cascade of marriage equality advances across the nation.  The above iconic image made the cover of Pride Magazine and people have told me that their copies are now framed and hanging in a place of honor in their homes. All hail Edith Windsor!