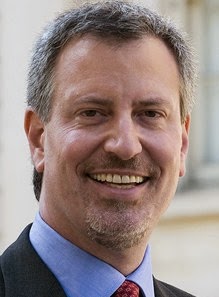 While campaigning for mayor, Bill De Blasio regularly vowed to freeze the rents of New York City’s one million rent-stabilized apartments. When he first made the promise, howling teabaggers knuckle-walked to their Twitter accounts to shriek that De Blasio was an “avowed Marxist.” Gothamist reports that De Blasio appears to setting the stage to come through on that pledge.

No mayor has utilized this before in the 45-year history of the Rent Guidelines Board but, with his four new appointees named to the Board this morning, Mayor de Blasio looks like he’s pretty serious about this one. A rent freeze would halt increases in rent for one million New Yorkers living in rent-stabilized apartments, which, contrary to popular belief, still exist actually exist somewhere out there in the gray void that is the NYC real estate market. And the newcomers to the Board are reportedly much more “tenant-friendly” than their predecessors under Bloomberg, most of whom were seen as landlord allies and Bloomberg devotees, enacting the highest increases in rent since 2008 just last year (4 percent for one-year leases, 7.75 for two-years).

In general, there are several requirements for a New York City apartment to fall under rent stabilization laws. The building must have been constructed between 1947 and 1974, it must contain six or more units, and the rent must be $2500 or less. Every year the Rent Guidelines Board sets the maximum percentage by which rents may be increased.

RELATED: Contrary to what outsiders might infer from television and movies, only about 30,000 NYC apartments remain rent-controlled, as those rules only apply to tenants (or their “lawful successors”) who have been in their units since before 1971.

NOTE: Don’t bother trying to tell a teabagger that “avowed” means “said it himself.” Obama, Biden, Gore, De Blasio – they’re all avowed Marxists or avowed communists out there in Teabagistan.