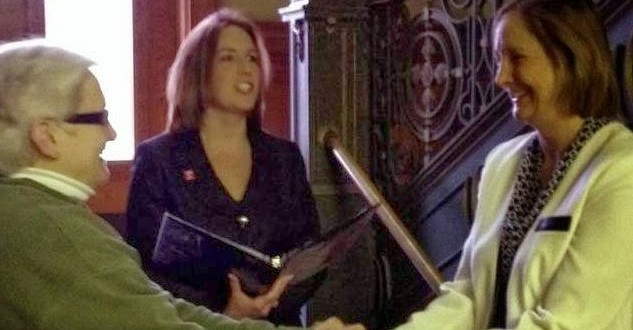 Via the Detroit Free Press:

Michigan’s first gay marriage was performed shortly after 8 a.m. today by Ingham County Clerk Barb Byrum at the historic courthouse in Mason. Glenna DeJong, 53, and Marsha Caspar, 52, both of Lansing, were married in the lobby after Byrum opened the clerk’s office at 8 a.m. and issued them a license. “We’ve been waiting 27 years for this,” said DeJong. As word spread, Byrum had peformed three wedding ceremonies by 8:30 a.m. and said she didn’t know how many she might perform today. DeJong and Caspar embraced as their eyes welled with tears, first as Byrum issued them a marriage license and then again after she performed a no-frills ceremony. Two onlookers were recruited to act as official witnesses on a damp gray morning in Mason.