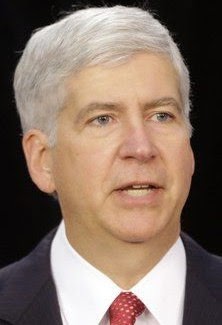 Michigan Gov. Rick Snyder says that while he considers the 300+ same-sex marriages conducted last week to be legal, he won’t allow state agencies to recognize them.

Snyder acknowledged same-sex couples “had a legal marriage.” But because of the court’s stay, he added, the gay marriage ban has been restored. The governor’s move closes the door, at least for now, to certain benefits reserved solely for married couples. The American Civil Liberties Union said more than 1,000 Michigan laws are tied to marriage. “We did our own homework and I believe this is a reasonable legal position to take based on the available literature and law,” Snyder told reporters

This afternoon the Human Rights Campaign called on US Attorney General Eric Holder to extend federal recognition to those marriages. Via press release:

The Department of Justice under Attorney General Eric Holder has been a remarkable leader in the fight for equal recognition of marriage for lesbian and gay couples. Their decision to recognize marriages performed in Utah during the period when gay couples were granted licenses was legally sound and morally right. The Human Rights Campaign has encouraged the Department to apply the same principles to the Michigan marriages that happened recently and we have every reason to believe that they will continue being champions of the LGBT community.