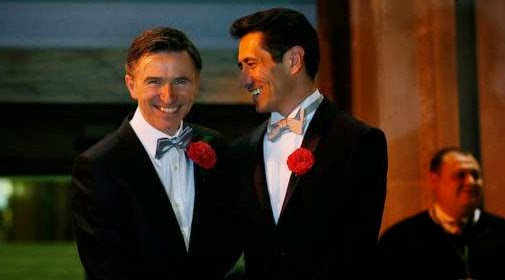 Same-sex marriages have commenced in England and Wales!

The law changed at midnight, with a number of gay couples vying to claim the title of being the first to be married in Britain by trying to time it perfectly so their vows are being said just seconds after the clock struck midnight. Among the first couples set to take advantage of the legalisation are Peter McGraith and David Cabreza, who have been together for 17 years. Speaking before his wedding, Mr McGraith said: “We are thrilled to be getting married. It is a mark of significant social progress in the UK that the legal distinction between gay and straight relationships has been removed. “Very few countries afford their gay and lesbian citizens equal marriage rights and we believe that this change in law will bring hope and strength to gay men and lesbians in Nigeria, Uganda, Russia, India and elsewhere, who lack basic equality and are being criminalised for their sexual orientation.”

How nice that the newlyweds used this press attention to talk about the plight of our people in other countries.