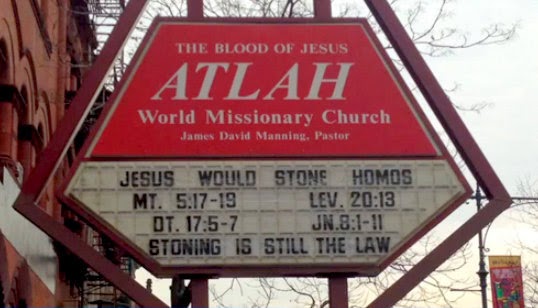 Last month Harlem Pastor James Manning earned national headlines when he posted a billboard declaring that President Obama has “released homo demons on the black man.” Today Manning upped the Christian Love™ with the above sign.  According to Manning’s YouTube clip posted this morning, Christians who refuse to stone homosexuals to death are “advocating lawlessness.” He goes on: “Stoning of the homos is now in order. Stoning is still the law.” We’ll stand by for Christian leaders to denounce Pastor Manning, but
don’t hold your breath – there was nothing but silence last month.