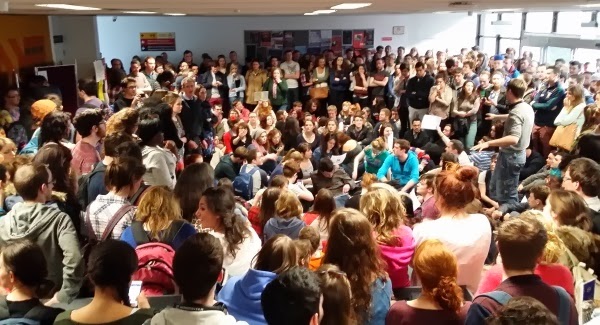 Students at the National University of Ireland staged a sit-in protest yesterday after an anti-gay marriage group placed posters on their campus.

A lunchtime demonstration by members of a Mayo-based family of Christian activists faced oppostion from students who took down and binned two posters opposing same-sex marriage. The family (understood to be a father with his three sons and two daughters) were campaigning for Enoch Burke, who is running for the position of Equality Officer in the college’s up-coming student union elections. (Enoch Burke is understood to be the auditor of the Christian Union Society in NUIG.) Most of the group’s posters related to the election, but they also displayed three posters opposing same-sex unions. In opposition, students staged a mock same-sex wedding to loud applause. Students also took down two of the posters and binned them, an observer told breakingnews.ie, at which point the family called the gardaí [police].

Marriage equality has been placed on the official agenda for Ireland’s Constitutional Convention to be held in mid-April. A recent poll shows that 75% of the Irish public backs same-sex marriage. The video below shows the students performing a mock gay wedding.