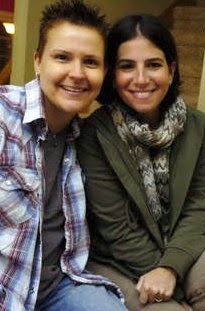 Today Lambda Legal asked a federal court to force Indiana to recognize the Massachusetts marriage of a terminally ill lesbian and her wife. Via press release:

Every day that Indiana denies Amy, Niki and their two children the protections of marriage is cruel and discriminatory against a family whose time together is precious,” said Paul Castillo, Staff Attorney for Lambda Legal. “This family shouldn’t have to endure discrimination from the State of Indiana while fighting to enjoy the time they have left together as a family dealing with a terminal illness.” Ms. Quasney and Ms. Sandler have been in a loving and committed relationship for 13 years, and they have two children under the age of three. Ms. Quasney was diagnosed in 2009 with ovarian cancer, having more than 100 tumors removed in surgery days later. Two additional surgeries followed, and aggressive chemotherapy treatment followed. They have a civil union in Illinois and married in Massachusetts in 2013 but need their marriage to be legally recognized in Indiana to receive the protections and security that every other married family in Indiana receives.

RELATED: Last July a federal court ordered Ohio to recognize the Maryland marriage of a terminally ill man and his husband. The ill man in that case passed away in October.