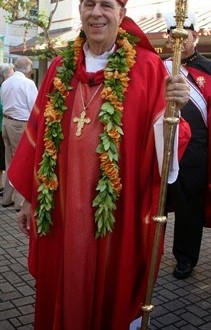 The Hawaii Catholic schools office, which supervises three dozen Roman Catholic private schools in the state, has just approved a new contract that says teachers can be fired if they engage in homosexual activity or marry someone of the same sex. The contract goes on to list a wide array of actions and behaviors that would justify termination. Among the other acts that could justify firing, according to the contract, are abortion, in vitro fertilization or “unmarried cohabitation.” “The school expressly reserves the right to terminate the employment of any Teacher, who by word or example, denies the teachings or authority of the Church, or whose personal life or conduct is, based on Catholic teaching, immoral,” says a portion of the contract that was obtained by Civil Beat.

All full and part-time teachers must sign the contract, which goes into effect this fall. You may recall that during Hawaii’s bitter same-sex marriage battle, Honolulu Bishop Larry Silva claimed that legalizing gay marriage would lead to children killing themselves.